As it has all gone  Pete Tong Two in my garden and we wait for a third day of heavy snow and the sound of apple tree branches cracking off under the wieght of wet snow on full leaf and blossom, I thought I’d share pictures of wall lizards who like it hot and sunny, to encourage the spring to return again.

A couple of weeks ago we watched this pair of wall lizards catching a few rays on the crumbling walls of a local castle. Lithe and elusive as a good idea, they slipped in and out of the cracks in the stone work, flicking their tails and jutting their chins. This is a limestone area, so the majority of the stones are white, but one stone was different and dark and as it absorbed the heat, the tiny lizards competed with dragon like ferocity to lay their scaly bellies on the warm rock and absorb the heat.

I know just how they felt!

This is the real Tau Emperor!

This magnificent specimen was the first find in my brand new moth trap. I don’t normally bother trying to attract moths so early in the year, but I could not resist lighting up my new Watkinson and Doncaster birthday present and this stunner was the first to be found on the egg boxes under the lamp in the morning.

She is like a very large oak eggar, but with brillant blue mirrors and  white arrows dotting her soft cinnamon coloured wings. When disturbed, she raised all her feet like a real pugilist and brandished them with admirable defensive aggression.

I think she would make it, in the on-line world of Warhammer with no problem at all!

A soft feather pillow to sink into engenders peaceful  sleep and it seems sparrows know it too!

I had been shaking out an old feather pillow on top of the potato peelings on our compost heap and some the feathers escaped. They caught on the dry earth and within minutes our local sparrows were down stuffing their beaks with pillow feathers to line their own new nests. They continued to visit all afternoon until every feather was gone and a small trail of white duck down floated down the quiet street in their wake.

Spring and a lot of the world seems to have gone seriously Pete Tong (wrong)! Yesterday there was a blizzard. Gigantic fat flakes of white that just got warm enough to melt a little and coat the whole garden in water, before the night time temperature crashed and everything was encased in ice.

The buds of the vine are destroyed, my peonies are mush, the hydrangea is dead to half its height , the wonderful flush of apple blossom is crisped and brown and my loves lies bleeding is collapsed and white.

And that is just the garden.

Don’t get me started on the rest of the world !!!

Today the wind was cold and wild  and the blossom flew in a spray of pink and white  through the branches. The last of the cherry blossom hurled into the air in a snow globe whirl of white. The apple blossom, more tenacious and solid is still open for the bees.

Today is my anniversary of starting this blog. Last spring was cold and wet and I started writing because I was so frustrated to not be in my garden and writing about it was the next best thing.

I have enjoyed making these posts and making contact with such an extraordinarily diverse range if people across the world. Checking in and seeing the orange dot next to the bell is still a real thrill and I love reading comments from my friends even more.

So to my followers : a heart felt  thank you for your interest and patience with my wonderful typos!!

I thought maybe I would stop on my anniversary, but as I am still enjoying myself I think I’ll carry on and enjoy your company and the pleasure of writing about

The seasons are composed of arrivals and departures. The first house martin, the first swallow, the storks building nests, the first spring flowers, the first seeds being set and now the arrival of the wonderful sweet-voiced linnets.

Our garden is a riot of dandelion flowers. The lawn is a bouncy castle of pollen cushions on which every honey bee and bumble bee in the world seems to be rolling around in yellow pantalooned glee. In the sunniest corner of the garden the flowers are over and the seed clocks are spinning seeds into the breeze and this is what the linnets have been waiting for. Their arrival in our garden is timed perfectly for the seeds that they love and they proclaim their new territory from the top of the half dead plum tree.

Linnets are slight birds with bright red streaky breasts and a longish forked tail. They are easy to mistake for sparrows in passing until they sing and their rich warbling, trilling song. An irresistible roll of song that seems the very essence of spring make them completely unmistakable and earn them the adjective melodious in their French name.

Their favourite food seed is called pissenlit in French which means piss the bed, as if you eat too many of the tasty green leaves in a salad, you may enjoy their diuretic properties later that night. In English the name dandelion comes from the French too as the little seed looks like a lion’s tooth – dent de lion. Linnets get their Latin name from their liking for hemp seeds and their English name for their fondness for the flax that was used to make linen.

For the linnets, the dandelion seeds on our drive are simply breakfast, dinner and lunch until they are all gone and the melodious linnets are more than happy to sing for their supper in return.

I wake up to rave music.

The sickening machine deep thump like my own heart about to explode. I take deep, deep breaths. Windows kept shut,  the rumble of the kettle and the calming sound of a teapot filling, restores some equilibrium, until the loathsome perpetrator of this insult  lapses somewhere into unconsciousness and the cacophony stops.

The sparrows chattering companionably. A great tit proclaiming his territory. A marsh tit tapping open a sunflower seed on the the trellis. The electric cackle of a redstart . A chiffchaff. The first deep pollen furred rumbles of bumble bees.

The neighbour’s dog Harry is let out and barks . The first horse from the stable ambles down the road and Harry barks again. The horse shys and his hooves clatter sharp on the tarmac. Harry smiles.

In the garden the hum of bees is louder. The pear tree is in full bloom and every single tiny flower seems covered in honey bees. Blink and the tree seems still, squint and it is writing with pollinating frenzy.

Overhead a buzzard mews plaintively swinging  into a swoop to impress his mate hanging in the paintbox blue sky.

A couple of frantic and obilivious cyclists whoosh by on thin wheels shouting . Another neighbour retrieves the beer can he left last night in the garden before his elderly mother peers out to admire her pink ribboned Easter rabbit decorations.

After lunch there is laughter under the trees over a cigarette. A desolutotry teenager bounces a basket ball for a few minutes.

Magpies cackle and four black kites glide over head in total silence, their universe so huge, so distant and unbounded.

In my garden I have planted cat nip in the past, but my cats and all the neighbours’ cats, rubbed both plants into oblivion with their ecstatic rolling and I have not subjected another plant to such a depressing fate. So, when I found a corner of my garden rubbed flat and an edging fence constantly pushed down, I decided to investigate the cause.

I have observed my cats Pixie and particularly Winston rolling and pushing their faces along the ground at this point and realized that they have exposed the root of a wild common valerian plant which seeded itself in the corner of the bed last year. As it is such a spectacular plant ( taller than me!) I had left it alone to flower and attract the bees during the summer.

I did not expect to come up again in the spring, but it has and the cats have discovered its narcotic and pleasurable effects all over again; rolling, rubbing and slithering in unashamed abandon on the now exposed white roots.

Apparently all cats love valerian as much as cat nip, but unlike cat nip it is the root they love not the leaves. I am not sure how long this plant will survive until the cats also love it to death; but as they seem to get so much fun from it, I shall leave them to roll in the spring sunshine while it lasts!

My cat is a drug dealer. 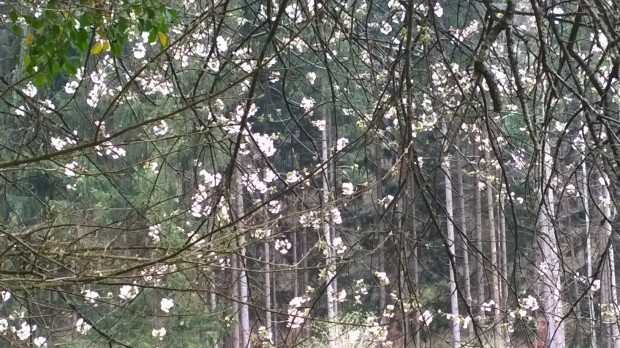 LOVELIEST of trees, the cherry now
Is hung with bloom along the bough,
And stands about the woodland ride
Wearing white for Eastertide.

Now, of my threescore years and ten,
Twenty will not come again,
And take from seventy springs a score,
It only leaves me fifty more.

And since to look at things in bloom
Fifty springs are little room,
About the woodlands I will go
To see the cherry hung with snow.

Today the cherry orchards were in full flower. It has been a cold snowy winter, but spring is spectacular and if the rain holds off, there should be an excellent cherry harvest.

In the woods the wild cherry were white against the dark conifers and I thought of this favourite Housman poem and counted my years left to ” watch the cherry hung with snow”.