After the heat came the rain and everything sighed, expanded, fluffed out a feather and a flower and grew exponentially!

The sun had turned everything to sugar and we picked masses of raspberries, sticky red currents and black currents as perfect as jewels.

I was drying a tray of rain washed berries before freezing them for the winter, when I opened my moth trap and found another new species for the life list. This extravagant creature is a scarlet tiger and she sat momentarily on my hand above the fruit.

There are so many new creatures to be found in every patch and scrap of world. I listened to a wonderful radio show on the almost indestructible tardigrade , that lives in moss and volcanoes and between the plates of barnacle shells.

I  had never heard of them, but now I regard the rain plumped moss of my path with renewed respect, knowing that it is home to such an extraordinary expression of life.

I love watching rose beetles bury themselves in flowers or shimmer, the very essence of “purest green”, amongst the mint leaves . Their extravagant carapaces always remind me of Gerald Durrell’s masterpiece “My Family and Other Animals” which was the first book I ever enjoyed studying at school and the book that inspired my husband’s family to spend so many years in Greece. The idea of tying such beautiful bugs to the hat, as did the rose beetle man, may seem absurd, but in Greece anything was possible.

“The last time I saw the Rose-beetle Man was one evening when I was sitting on a hill-top overlooking the road. He had obviously been to some fiesta and had been plied with much wine, for he swayed to and fro across the road, piping a melancholy tune on his flute. I shouted a greeting, and he waved extravagantly without looking back. As he rounded the corner he was silhouetted for a moment against the pale lavender evening sky. I could see his battered hat with the fluttering feathers, the bulging pockets of his coat, the bamboo cages full of sleepy pigeons on his back, and above his head, circling drowsily round and round, I could see the dim specks that were the rose-beetles. Then he rounded the curve of the road and there was only the pale sky with a new moon floating in it like a silver feather, and the soft twittering of his flute dying away in the dusk.”
“My Family and Other Animals” Gerald Durrell (1956)

This is the garden at 5.30 this morning with the sun already up and slanting through the haze. It was easy to get up early, as the night had been so warm, sleep had been light.

The deep drone of bees from my neighbour’s sweet chestnut tree was loud and the cats were already out hunting mice and my long suffering slow worms. I didn’t care that I hadn’t slept much or that work would be intolerably hot again because the holidays start now and I have the utter luxury of observing, exploring, sometimes even working in, but always enjoying my own wonderful garden, my own little scrap of heaven!

This weekend we went looking for a flower. We were told about this flower a year ago, by an elderly botanist who showed us pictures of the great pink spikes of flowers as we ate dinner in a vineyard last summer.

In a mixture of broken German, French and English we discovered that this very rare and very strange plant grew close by and he tried to describe exactly where he had seen it.

The next day we also tried to find it. We tramped over the wonderful limestone cap of a hill that was covered in fly orchids, thorny roses and pinks.  We found the most extravagant orchid I have ever seen in Europe outside of a green house. Large and smelling powerfully of goats, the tongues of its greenish flowers cork screwed down and seemed to lick the stems, giving it the obvious name of lizard orchid. As we dipped back into the neat rows of vines, a bird was startled up and the great parti coloured crest of a hoopoe was plain to see, as the heavy bird lifted up and gave its unmistakable hoopoe call : familiar in the Mediterranean, but so strange here in central Europe.  This little patch of limestone protected for nature amidst the closely planted vines, is a truly remarkable place and is home to so many species that are rarely seen in the Alsace.

Eventually we wandered our way back to the car, stopping only to cool off in the wonderful cave of the local winery.  Swallows nested high up in the eves of the old roof and swooped in to chatter noisily as we sampled some Alsace Pinot Gris and Muscat and chatted to the young woman who lamented Brexit sadly, as she had enjoyed working in England for a while, loved the people and could not see what Britain had to gain by cutting itself off from Europe ( and good wine!).

A year later, we tried again. We tramped the same hill in the sunshine; saw more hoopoes and clouds of Marbled White butterflies, Banded Graylings, Swallow Tails, Queen of Spain Fritillaries and man, many more.  The lizard orchids had gone to seed and we were tired. There had been no seats on the walk so far and so when we found one with the most wonderful view of the village below, I remarked the only thing that would be even better would be if the elusive flowers were right next to the seat – and there they were – also all gone to seed!

If you look closely at the photo you too can see the robust glossy leaves of the plant and the tall brown stems of the seed heads.  This is Dictamnus albus or Fraxinella.  A strange plant that is unique in its own genus  (rutaceae) and very unusual in the wild.  It exudes a curious smelling perfumed oil, that clung to our hands after we had touched it.  In fact it produces so much of this oil that it is also called the Burning Bush as in very hot weather it has been known to spontaneously combust and may well have been the burning bush of Moses in the Bible. The oil can be ignited by a lighter as you can see in this you tube clip of the garden variety.

We were too late to admire the great pink flowers we had seen in the photo.  You don’t always get what you want, but in pursuit of this rarity we had seen and enjoyed so much, that I think you could definitely say we got what we needed!

The weather forecast is for hot and dry for the next ten days. Somehow my snails know this and are going up high, shutting up their shells and conserving slime. But how on earth do they know this? Can they read weather forecasts? Do they sense the high pressure building in their tiny shells? Did a bird tweet it to them? Three snails have chosen my letter box to wait out the coming dry weather and it maybe because they read French, as the sticker says agitate for biodiversity!

The second mystery involves my gardening gloves. As I tried to put them on this morning I realised there was something in the thumb. Pulled inside out I found it crammed full of bright yellow pollen which something had hidden there from the dandelions that covered the lawn a few weeks ago. Who? What? Why?

Tiny every day mysteries from the natural world!

At this time of year the season seems to be in a mad race with itself. The day is so long, the sunlight so bright, the rain so hard; the plants are pumping up so fast I swear I can hear them growing.

Every morning a new flower has opened; more and more leaves have unfurled; the beans have slithered up their poles; the marrows have pushed across the lawn. Bindweed has pulled a fruit bush down into the grass; spears of horsetails have erupted from out of the soil and the slugs have left a silver trail over everything.

Even in the deep forest strange things are growing. Perfect candles of white orchids shimmer in the dark and bird’s nest orchids, brown and saprophytic push out of the loose decaying leaves.

There will be plenty of time to sleep in the winter.

When we lived in Wales we used to keep watch on the nest of a peregrine falcon. It involved long hours ensuring no one stole the eggs to sell to falconers in the Middle East and while we lay in the grass, we also got to watch cuckoos.

The plump, barred birds picked caterpillars off the bushes and squeezed their inner ends down  their throats like a thrifty dentist squeezing the last of a tube of tooth paste. Since then I have rarely seen them and the only confirmation that the they still exist has came from the unmistakable call of the male bird.

When we first moved to France I heard a few each year and then there were none , but this year, while feeding my sparrows, I  heard a call, loud clear and wonderfully unmistakable .

On the same day we stopped by a thin line of reeds between two fields and listened to the sweet call of a very different bird. If you look closely at the photo you can see a very small bird singing. It is a reed warbler and it is smaller than a sparrrow and weighs the same as an envelope. This is the tiny bird that most often raises the young of the cuckoo. Their own chicks are thrown out by the cuckoo hatchling who has never laid eyes on its own parents . By mimicking the sound of a hungry baby reed warbler the cuckoo encourages its diminutive parents to feed the imposer until it dwarfs them in size. When it is fully grown the cuckoo sets off for the rain forests of central Africa, without ever having seen another cuckoo in its life.

It is an extraordinary story of how interconnected we are on this small planet and how a single evocative sound in one part of the world links us to all of the rest . 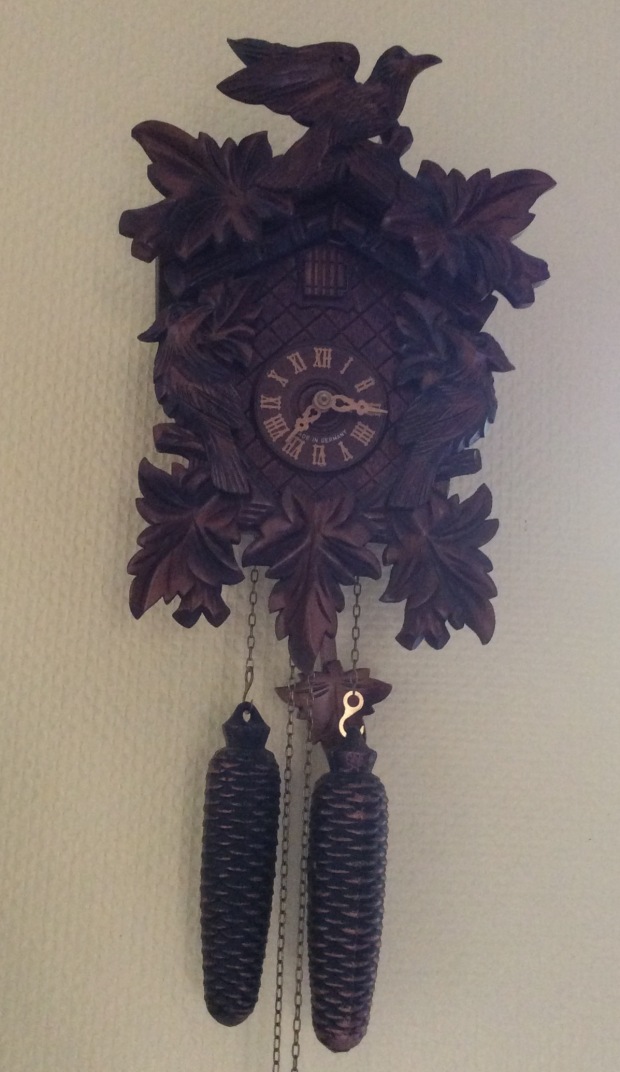