In my first spring in Switzerland I explored a scrap of meadow, waiting to be built on behind our tidy apartment and found a plant with broad green leaves and long swollen seed head. I had watched every flower appear in the spring on this patch of green and absolutely none of them had preceded this strange seed. The mystery was not solved until a few years later when I moved just over the border into France.

Around my village are lots of parcels of land that obviously belong to different farmers. They mostly support a few fruit trees and lots of grass that is cut at different times for the animals. In this patch work of cut and uncut grass, at the end  of August large beautiful pale purple crocus appear. The flowers push up without any protective green sepals and no leaves of any description. They seem to appear over night and some are mowed down the next day, but many survive long enough to be pollinated.  Autumnal crocus would be better called August Crocus as this is the month of their  glory.

So what is the connection between the mysterious flowerless seed and the leafless flower? Well, the pollinated ovary goes down into the corm underground, where it waits all winter long to make a seed. In the spring the swollen seed head appears with two sturdy green leaves to feed it. Once the seed heads bursts, it disappears until the flowers surprise us again at the end of summer! 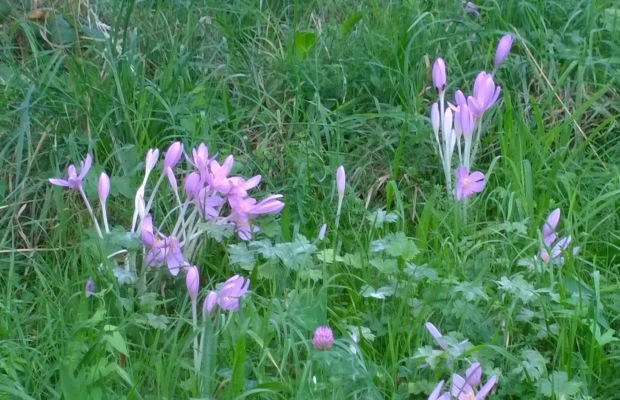