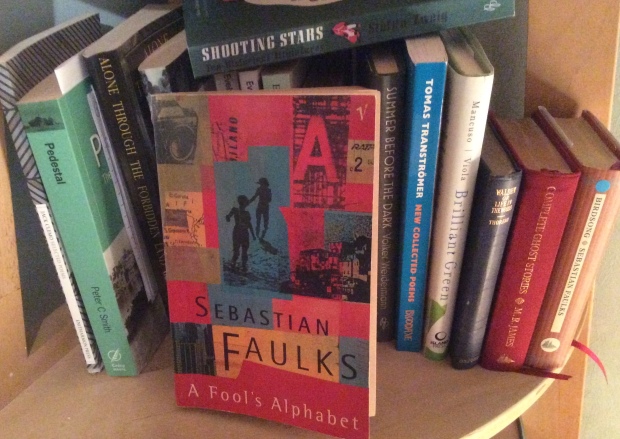 November is a month to read in. The garden has died back and after work there is no light left to admire what has survived.

And so I read.  Serendipity  has provided an eclectic selection recently thanks to a school book sale.

Firstly I am reading Peter Camenzind by Herman Hesse; then A Fool’s Alphabet by Sebastian Faulks; a biography of Jame Joyce by Herbert Corman and The Ascent Of Money by Niall Fergusun.  This may sound impressive, but I admit now that I am reading them with varying success.

The Ascent of Money is on its way back to the library.  I am 60 pages in and waning.  I started well. The introduction was arresting. The average salary of an American in 2007 was $34,000.  The chief executive of Goldman Sachs, a man called Lloyd Blankfein, received  $ 46 million dollars – per year. I cannot even conceive of such a sum, so I had to read on. Fergusun explains metal money the gold and silver of South America that fueled Spain and Europe in fascinating detail, but once he goes into the methods of banking  and accountancy that grew out of Renaissance Italy, I struggle and start to skip pages. As life is short, I move on!

The James Joyce biography was written the year after Joyce  died. The stamp in the front of the book shows it was  bought in India and then the inscription shows it was given as a  present. It was sold from a library, no doubt its outspoken opinions on everything from Irishness to politics, coupled with its lyrical description deemed it unfashionable, but I am greatly enjoying it . I savour it in tart, cool, evocative slices.

Peter Carmenzind was writen in 1904 by Herman Hesse, before either of the terrible wars ripped through Europe . The hero was born in a remote Alpine village, which was not considered romantic. He climbs his mountains, but no one skis down them and the concrete and the chair lifts of 21century are an inconceivable future scar. The descriptions of the Föhn wind roaring up from the soft south to rock the roots of the icy peaks are memorable.

The book that I read each night at the moment is however A Fool’s Alphabet. This shows the life of a child of a British soldier and an Italian woman; told over places which begin which each letter of the alphabet in order. To achieve this, the story is not chronological, but swings between settings to cover each letter in turn. Rather than being contrived or disorientating, this structure is unexpectedly pleasing, as it seems to mirror the random nature of memory. I know I am enjoying it because I don’t want it to end too soon!

It is odd to write about what I am reading, as I don’t aim to recommend these books to anyone. It is rather like introducing acquaintances to one another at a rather badly lit party.

8 thoughts on “Reading in November.”