Christmas trees have history . Pagans used ever greens to bring life to the darkest day of the year and they have been brought into homes down the centuries around the shortest day of the year to comfort us with the knowledge that the world is not dead and that birth will happen.

The very earliest recorded public Christmas trees are from Latvia and Lithuania and the idea seemed to have traveled south to Germany where a tree was set up in 1570 decorated with apples, nuts, pretzels and paper flowers. Martin Luther is credited with putting up the first tree in a home and the fashion spread.

This year was such a good apple harvest here, but the pressoir is finally closed as nearly all the apples have been brought in and juiced or turned to cider.  However some trees still hold on to their apples. Perfect red or yellow apples hang from leafless branches like an opening for Sleeping Beauty .The  idea of collecting and even gilding such winter apples is obvious and hung on fir trees they were the prototype for the glass baubles and decorations of our artifical trees today.

Queen Victoria’s German husband brought the Christmas tree tradition with him to England and an engraving of the family admiring their decorated tree started a fashion that swept the country.  I love the detail that the same engraving was reproduced in the USA , but the woman was without her crown and the man without his mustache in order to make the figures look like an American family – and so the Christmas tree became fashionable across the Atlantic and eventually the whole world!

Strasbourg Christmas market is the oldest in the  world. The capital of the Alsace also calls itself the capital of Christmas. German and French alternately, Strasboroug has kept alive the traditions of the Christmas tree for over 400 years. The shootings in the colourful market earlier this week by a deranged criminal with a gun were frightening, but the stalls will be open again this weekend, the police have done their job and the last uncollected apples on the trees are still telling the story of light in the darkest time of the year. 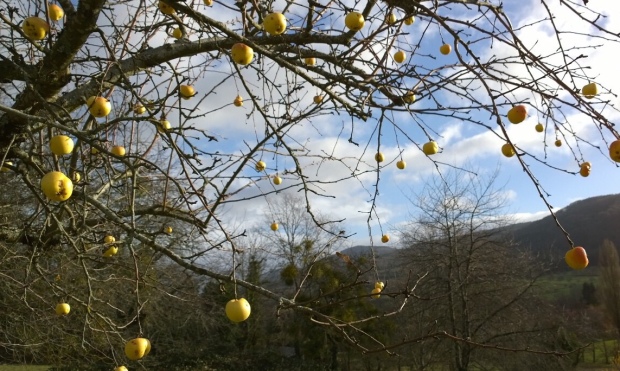