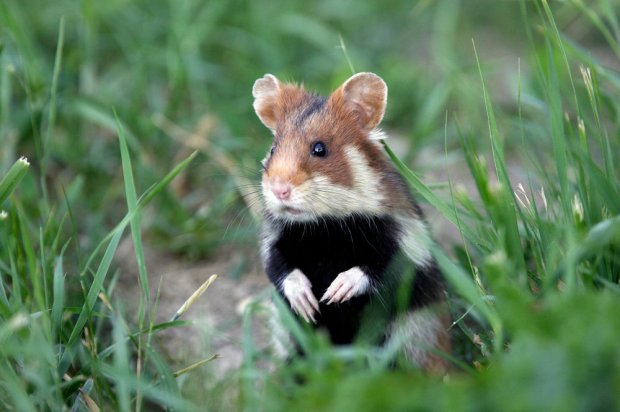 The Giant Hamster of the Alsace is a remarkable creature. It is one of the most endangered animals in France and one of the least loved. It is almost 10 inches long, covered in golden fur with a bizarre black and white spotted tummy, big eyes and delicate paws. The French care so little about this wonderful teddy bear, that the European Council had to fine them millions of euros before the government did anything at all to help the last 180 animals in the country.

A small band of concerned naturalists brought the giant hamsters’ plight to the authorities and may just have saved it in the nick of time, but it is still critically endangered in France .  I guess there is something inherently funny about the concept of a giant hamster and I wonder if that is part of the problem.

The real problem for Giant Hamsters is maize. The low land parts of the Alsace are absolutely covered in it. This monoculture has been a disaster for so much flora and fauna in Europe. The plant takes for ever to germinate and the bare soil is washed away every year in spring rains.  The farmers plant right to the field boundary leaving no millimetre for wild flowers and animals. Anything that might get a toe hold in an uneven corner is sprayed dead with weedkiller and/or mowed flat.

Hamsters need grain and alfalfa, cabbages: in short a mixture of agriculture and wild food. Food is pulled down into underground burrows and used to feed themselves during their six months of hibernation safe below. They can’t eat maize and they can’t travel distances between suitable areas of food, especially when housing , motorways and hyper markets have covered covered the lowlands too.

These sturdy, intelligent burly creatures reproduce only once a year, have small broods and do not respond well to captivity; so getting their numbers up has been as difficult as breeding giant pandas! The population is still critically low at only 200 and they need to creep up to a massive 1500 to have  sustainable numbers.

I saw my first Hamsters at the NaturOparC (sic) in Hunawihr where they are doing their absolute best to pull this unloved cutey back from the brink of extinction in France.

It seems curious that first world country like France can allow such an iconic and adorable creature to be lost . They are already extinct in neighbouring Switzerland, and so I wish the last few all the luck they can cram in to their round furry cheeks.

This cracked tile shows one standing up on its hind legs displaying the distinctive spottey tummy.

8 thoughts on “Grand Hamster of the Alsace.”