Capturing complex beauty is so difficult and I have the greatest  respect for those who take  wonderful photos with such apparent ease.

My garden is crammed with columbines at this time of year all of which have come from seeds collected in the woods locally. They cross and cross with one another and the variety they produce is mesmeric. Every May I try to capture them, but I am never satisfied by the result, as they hide in their five petaled whorls and I cannot begin to show the diversity of their colour and petals.

Some are pale, almost white and they stand out in the dawn light. Others are baby pink and innocent; next are the deep, sophisticated , rose-red flowers. Seemingly unconnected in gradation are the purple columbines: a rare few seem actually blue and are the smallest and most shyly flowered; then there are the work -a -day mid purples with the longest spurs;  followed by purples rich enough for an emperor’s robe and finally, the most exotic of all: the midnight purples, so dark that they seem to absorb the very sun light around them .

Some flowers have just a single whorl of five petals: each petal contains a nectary to encourage the bees to visit and to pollenate .  The nectaries are curled over and this has given the flowers their name, as they look like five doves or columbs facing one another in a delicate ring. They have also given columbines the folk names of “ladies in bonnets”and “old ladies” from when women kept warm and modest in complicated lace caps.

Bumbles bees cannot be bothered extending their long tongues into the spurs and they simply bite into the neck of the ”dove” and steal the nectar provided by the flower. Some plants are not satisfied  with just one ring of petal doves and produce natural “sports” of flowers which are crammed with petals, so they look like pom-poms or little floribunda roses.

This variety is absolutely glorious.

I understand Gregor Mendel started our understanding of genetics by studying the way peas crossed with one another . I am glad he studied  such a visually dull flower, as I think he would never have gained such important insight, if he had studied columbines – their beauty is just too distracting! 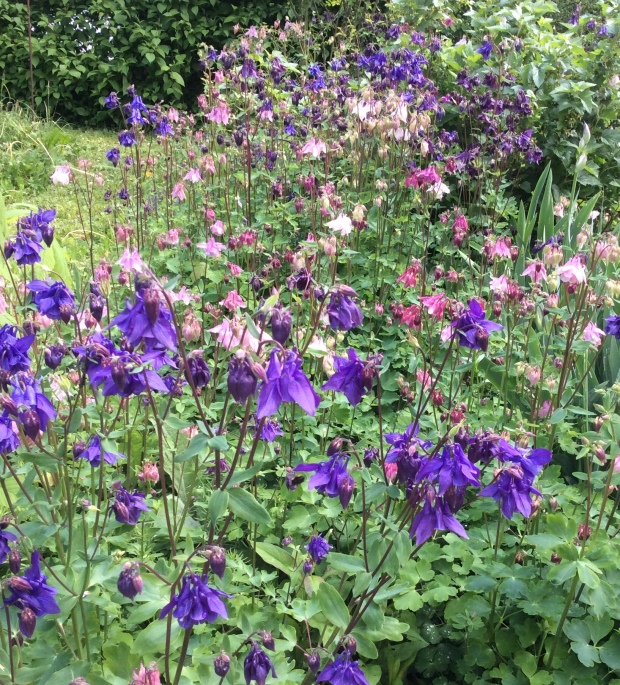