While looking for shade on a sunny day, my eye was caught by a strange clay pot opening on the underside of the kitchen window. It wasnt there before. Made of perfect solid clay with a delicate circular mouth, the colour exactly the same as the painted wall .

I waited. Nothing happened. It was hot and very Adlestrop.

The next day the pot has changed shape some how and then there was a huge, elegantly waisted wasp at the mouth of the pot. The wasp carried a ball of mud and as I watched it carefully rolled it into the opening and sealed up the whole.

The wasp returned with damp clay and delicately plastered, layer, by thin layer of mud over the pot until eventually the pot had been subsumed into an unnoticeable bump innocuous under the window ledge.

A guide book helped me identify the workman as a potter wasp Delta unguiculatum……..”…

The pot is home for its single egg which is suspended from a thread inside the pot. The wasp provisions its young with a caterpillar, which the adult has paralysed with poison. The caterpillar is fed into the mouth of the pot to stay fresh until the egg hatches and the the grub falls from its thread onto the caterpillar, which it then devours. When the grub reaches maturity, the new wasp breaks out of its pottery nursery and feeds on nectar from flowers outside.

The shape of the nest has been said to inspire humans to make their first clay pots.

We have used pots to store grain and seeds for millennia. The wasp worked it out first and used them to store food for its young and to house them as they grew.

It may seem as if nothing is happening on a hot day, but all of life and human history is carefully building, mud mouthful by mud mouthful under the kitchen window. 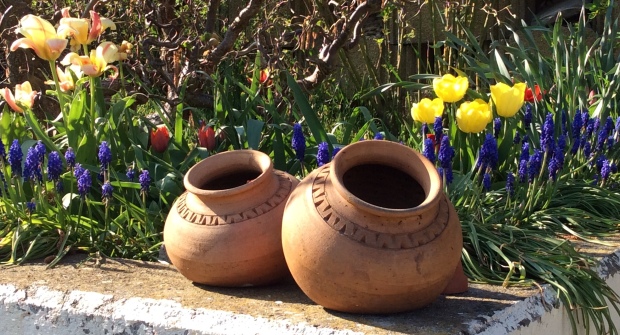